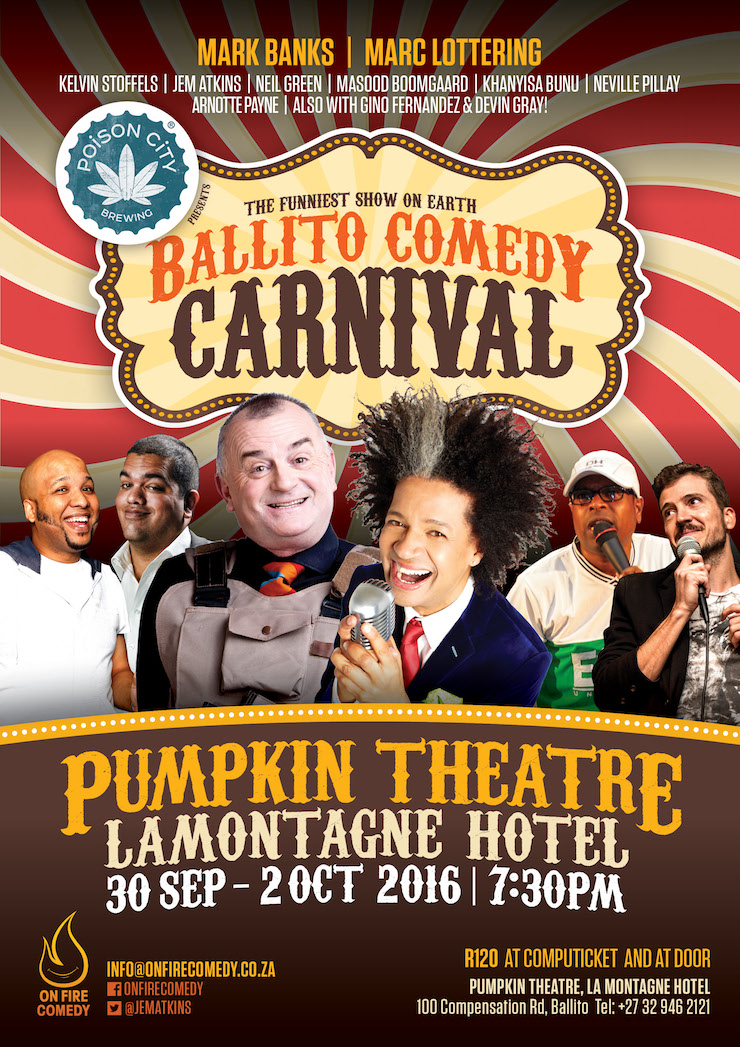 It’s the biggest ever comedy event to hit Ballito, taking place 30 September to 02 October at the La Montagne Resort, featuring legendary funny men Marc Lottering and Mark Banks, who will be supported by a string of top local acts, as well as comics on tour from JHB and Cape Town.

Tickets R120 at Computicket / Checkers, or at the door.

Info/Bookings: 032 946 2121/ This email address is being protected from spambots. You need JavaScript enabled to view it.

For more info on the specific line-ups, see www.onfirecomedy.co.za

Cape Comedy icon, MARC LOTTERING, has thrilled comedy audiences for years with his signature style of storytelling, enjoying widespread acclaim with his box office hit shows “From the Cape Flats with Love”, “I Don’t Work on Sundays” and most recently “Hashtag Lottering.”

He has played the biggest stages in the country and toured internationally, entertaining audiences in London, Australia and Dubai.

Equally accomplished is SA comedy legend, MARK BANKS, winner of the Lifetime Achievement Award at the Savanna Comics’ Choice Awards last year. This is the man who has had South Africa “ripped” with his tell-it-like-it-is, in-your-face brand of comedy, offering a unique, often sarcastic-laden, perspective on current affairs and issues that really cause us bother.

Also participating in the Carnival of Funny is Durban’s own NEVILLE PILLAY - a firm favourite in KZN, this hilarious Stand-Up Comedian, accomplished writer and actor (‘Attack of the Indian Werewolf’, ‘31 Million Reasons’ , ‘Curry And Vice’), and award-winning Morning Radio Show Host is practically a household name!

Comedy goers can also look forward to the mirth-laden antics of top locals - Kelvin Stoffels, Carvin Goldstone, Arnotte Payne, Masood Boomgaard, Jem Atkins and Neil Green, as well as hilarious acts - Gino Fernandez (CPT), Devin Gray (CPT), and Khanyisa Bhunu (JHB), all of whom who will feature over the weekend.

The Ballito Comedy Carnival is a celebration of all things funny and is not to be missed. Tickets are R120 and are available from Computicket and Checkers.
Proudly brought to you by On Fire Comedy - “Durban’s HOTTEST Comedy Events Specialists!”

Email: This email address is being protected from spambots. You need JavaScript enabled to view it.