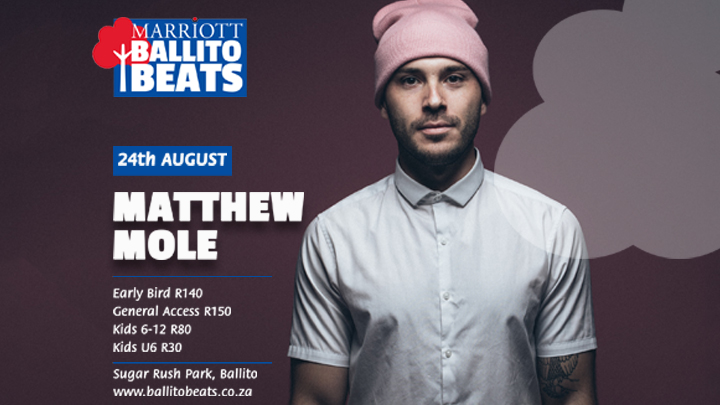 With a number of awards and accolades under his belt, chart toppers and a new album dominating on iTunes South Africa, Ballito locals are in for a seriously fun night out on Friday the 24th of August, when Matthew Mole comes to play!

As the fourth and final show for 2018, the Marriott Ballito Beats Music Series will bring people together once again for an evening of family, friends and great South African entertainment.

The series offers the North Coast community an opportunity to see award-winning bands like Mango Groove, Freshlyground, Jeremy Loops and now, this August, the musically gifted Matthew Mole – all while chilling with friends on the open lawns of Sugar Rush Park, snacking on picnic style titbits under a glorious Ballito night sky; adding a whole new level of family entertainment to the Ballito social scene.

“After the sold out success of our Jeremy Loops concert in March earlier this year, we are really excited to host another Friday night session as opposed to the more relaxed Sunday afternoon show,” says Stu Berry, Marriott Ballito Beats series director. “It’s a great opportunity for a fun night out with the whole family. People of all ages come together to dance, sing along and have a good time. It’s a very inclusive event, as we continue to deliver on our promise to offer locals the best family entertainment,  right here in their very own back yard.”

In 2012, a young Matthew Mole won the prestigious Converse “Get out Of the Garage” competition. And the rest, really is history. The accolade rapidly propelled Matthew’s career and led him to a signing with South Africa's leading Independent label, Just Music. July 2016 saw Mole release his highly anticipated sophomore album “Run”, which reached the No. 1 position on iTunes South Africa and the album’s first single, “Run” achieved Gold Status within 3 months of release. The album “Run” was also nominated for Best Pop Album, Best Produced Album and Record of the Year at SAMA 23. From International stages, to headlining local festivals, and now… Ballito Beats… fans can get excited for a show of award winning calibre.

“I played my first ever shows in KZN years ago when it was just me and a guitar,” says Mole. “The crowds have always been some of my favourites! I’ve noticed a lot of love and support from all over KZN and it will always be one of my favourite places to play shows. I’ve been trying to come up with new ways of getting the audience involved in as much of the show as possible, so there are always new things to do and try and I can’t wait to get social, loud and excited with the Ballito crowd.”

Opening the stage for Matthew Mole will be local trio, Bradley Grey Band. With a debut album gaining swift momentum with fans new and old, the band is made up of songwriter, pianist and lead vocalist Bradley Grey, and brothers Ryan and Barry De Beer on bass and drums, respectively. A selection of self-penned songs showcase the band’s musical and instrumental talents, tug on the emotions and leave you wanting more. The band take inspiration from the likes of The Fray, Coldplay and One Republic and aim to reignite hope for the SA Rock scene with their on-stage passion for making music that people love.

The Sugar Rush Park gates will open at 16h30 on Friday the 24th of August with Bradley Grey Band taking to the stage from 18h30, followed by Matthew Mole. Fans are encouraged to book their tickets online at www.webtickets.co.za before the show sells out or via www.ballitobeats.co.za. Tickets are available for R150 for general access, R80 for children between the ages 6 and 12 and children under 6 are R30 per ticket. See you there!